How much time do you spend editing the ranges referenced in your formulas because you’ve added new data to your source?

This is what I’m talking about; let’s say you have some data in columns A:E: 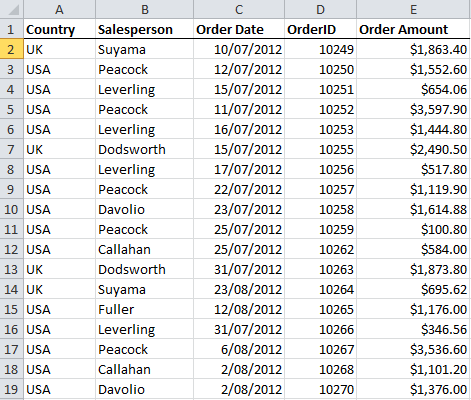 And in columns G and H you have a summary of the data, in this example, sales by Salesperson: 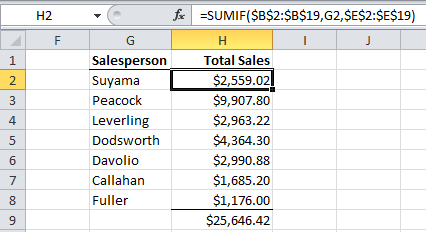 See the formula in the formula bar is fixed on cells B2:B19 and E2:E19. When I add new data for September to my data in columns A:E I have to manually edit my formulas in column H to include the new rows.

Let me just say, if you do this type of thing more than once in any workbook then you are wasting valuable time, and you should be setting up your formulas with dynamic ranges.

Dynamic ranges automatically detect new data and include it in your formulas.
Forget VBA, this is hands down one of the best ways to save time when working with Excel.

By submitting your email address you agree that we can email you our Excel newsletter.
Please enter a valid email address.
Download the Excel Workbook and follow along. Note: This is a .xlsx file. Please ensure your browser doesn't change the file extension on download.

There are a few different ways to set up ranges so that they dynamically update.

For example taking the data above you could replace the formula in cell H2 with:

While this will work, it is the lazy way to create dynamic references and it’s not recommended.

Why? Because you’re asking Excel to do a load of work checking cells that are empty, and in Excel 2007 onward there are 1M+ cells in every column. The bottom line is whole column/row references = a slow workbook (usually).

Tip: If your workbooks are slow to calculate and save, and you have whole column or row references then this is likely to be the culprit.

Dynamic references are just one of the benefits to housing your data in Excel Tables. Find out how to set them up and the other benefits of Excel Tables here.

Tip: If formulas are still a little daunting for you then Excel Tables will give you loads of benefits without the need for complex formulas.

We can replace our formula in the example above with this:

Where ‘salesperson’ and ‘OrderAmt’ are dynamic named ranges, as you can see in the Name Manager below: 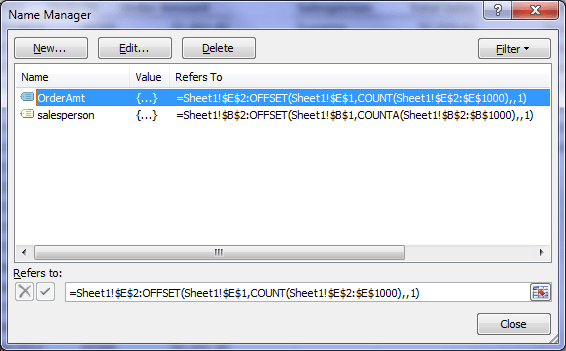 How to set up a dynamic named range

To set up any Named range go to the Formulas tab of the ribbon and click ‘Define Name’:

We can make it dynamic by entering a formula in the ‘Refers to:’ field like this:

Hold up, let’s take a closer look at that formula in the ‘Refers to:’ field:

The first part in orange is nothing special, but the second part in blue and pink uses the OFFSET and COUNTA functions to return a reference to the last cell in the range B2:B1000 that contains data.

Here’s a quick reminder of the syntax for the OFFSET function:

There’s an in-depth tutorial on the OFFSET function here, but I’ll quickly translate what this formula is doing in English.

That is, if I start in cell B1 and count down 18 cells I end up in cell, B19 therefore my formula evaluates like this:

When new data is added after cell B19 the formula will dynamically update to return the correct range, up to a maximum of row 1000 (because I’m only counting data in the range B2:B1000).

The Problem with OFFSET

Now, while a dynamic named range using OFFSET is good, there is one main problem with it:

OFFSET is a volatile function, which means every time you edit any cell it recalculates. The impact of this can render large workbooks slow, very slow.

This is the reason why the next option is the best.

The INDEX function is not only non-volatile, it’s faster than the OFFSET function.

We can set up a dynamic named range for the Salesperson column using INDEX like this:

The syntax for the INDEX function in its reference form is:

Note: the last two arguments, [column_num] and [area_num] are optional as we can tell from the square brackets. We don’t need them in this formula.

=Reference the range that starts in cell E2:, then INDEX the range E2:E1000, and return the row_num of the last cell containing data by counting all cells in the range B2:B1000 that contain numbers, (which = 18 i.e. rows 2 to 19), Index therefore returns a reference to E19.

This is just one of the tricks in the INDEX hat. When teamed up with MATCH it can replace VLOOKUP, in fact INDEX & MATCH are faster than VLOOKUP too.

“INDEX is the single most important function in the roster of Microsoft Excel functions”.

Click here for a comprehensive tutorial on the INDEX function.

Relative Named Ranges in Excel allow you to reuse named ranges with different results dependent on the cell you use them in.

This Excel Named Range shortcut using the exclamation mark will enable you to create a global name with local scope.

Formulas should and can be quick to write, interpret and update. That's why writing Excel formulas efficiently should be one of the first skills you master.

Excel named ranges can be a huge time saver. They're easy to use and even easier to read in your formulas.

Take your Excel skills to the next level with this top 10 intermediate Excel functions. These are must know functions for all Excel users.
Category: Excel FormulasTag: named ranges
Previous Post: