Kathy uses Excel’s intersect operator to quickly SUM a cell, or range of cells at the intersection of two ranges.

You’re forgiven if you’re thinking I’ve just swallowed a load of Excel syntax, so let me show you an example.

I call this technique the Lazy Lookup, and there’s nothing wrong with being lazy, or perhaps you might like to call it efficient, as it sounds, well, less lazy 🙂

We’ll take this table of data: 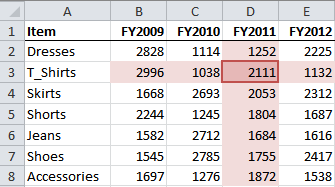 And let’s say I wanted to find the value for T-Shirts for FY2011; I could simply enter this formula:

Obviously I could also enter =D3 but then I'd need to know that that was the cell reference, which is not usually the case when you're doing a lookup, so we’ll ignore that for now.

Notice how there are no brackets in the formula (you don’t need them to lookup a single cell), and there is a space between the two ranges?

This space is the ‘intersect operator’, and it instructs Excel to find the value in the cell at the intersection of the two ranges, which is D3.

You could also use this formula to return text, since there is only one cell at the intersection.

While the above example works, it’s a bit laborious to enter the cell ranges, and since this is a lazy lookup we need to make it quicker and easier to enter.

To do this I’ve set up the following named ranges for each column and row in my table:

Tip: I set up all these named ranges in just a few steps: 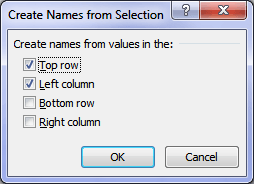 Now I have my named ranges set up I can write the formula above like this:

Again, no brackets, just a space between the two names. I think you’ll agree this now meets the ‘lazy’ requirement quite nicely.

You could use this formula: 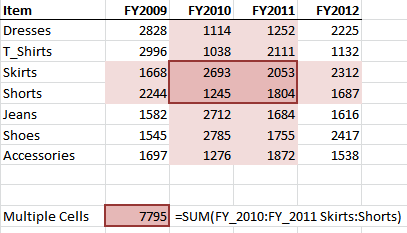 If you want to return the SUM of non-contiguous ranges simply group each set of rows and each set of columns together inside brackets like this: 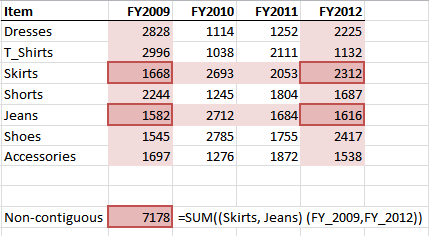 Note: the figures used in this example are fictional (I created them using the RANDBETWEEN function); I would never accept a reduction in my clothing budget year on year. 😉

Thanks to Kathy for sharing the Intersect Operator with us.

"I work with various forms of health care data, program in SAS and use Excel for deliverables and transitioning data to non-programmers. I have been using Excel for many years, mostly at a relatively basic level, but am now writing macros to do more of the analysis in Excel."

Tips and tricks with hyperlinks to make them dynamically update as the selection in the sheet changes. Sample workbook available.

The Excel HYPERLINK function creates links to places inside or outside of your Excel file. I'll show you a shortcut for creating them that few people know. 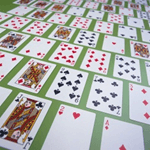 Excel Factor 14 Interleave Data from Two Columns into One

Take your Excel skills to the next level with this top 10 intermediate Excel functions. These are must know functions for all Excel users.
Category: Excel FormulasTag: Excel_Factor
Previous Post: