The Excel HLOOKUP formula is just like the VLOOKUP formula, only the table you are looking up is laid out in a horizontal list, rather than vertically. Hence the ‘H’ for horizontal, and ‘V’ for vertical.

Just like the VLOOKUP, the HLOOKUP function can be used to find an exact match or used in a sorted list.

By submitting your email address you agree that we can email you our Excel newsletter.
Please enter a valid email address.
Download the workbook. Note: This is a .xlsx file. Please ensure your browser doesn't change the file extension on download.

And to translate it into English it would read:

Let’s make it even clearer by applying it to our example:

OK, now that’s clarified, in Excel our formula in column F for the above example would be:

Note: you’ll notice the table range I1:P2 has dollar $ signs around it. For more on this read my previous tutorial on absolute references.

This would give us the commission rate for Doug of 6%, but what we really want in column F is the commission $ amount. This is easily achieved with an extension to the above formula as follows.

Let’s make it even easier by giving the Commission Rates table a named range. Let’s call it ‘ComRates’. We could then more easily write it, and also interpret it quickly when revisiting the worksheet at a later date. With a named range of ‘ComRates’ our formula would read:

Although the formula looks the same when you use ‘TRUE’, HLOOKUP finds the nearest match for the value you’re looking up. Let’s look at an example.

Using the previous example, again we want to calculate the Commission $ amount. However, this time the commission is based on the Total $k amount and where it falls into our Commission Rates table.

As a result our Commission Rate is based on where the Total $k falls into the scale on our table.

Taking the table below our HLOOKUP sorted list formula for column F in English will read:

In Excel it will be entered as follows (including the *E2 to get the actual $k commission amount as we did above): 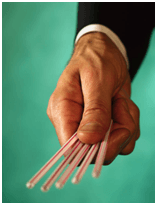 The Excel CHOOSE function on its own it isn't all that special, but when you team it up with some other functions they become very clever.

VLOOKUP to the left with this clever use of CHOOSE to trick Excel into looking up a column to the left.

Use INDEX MATCH as a powerful alternative to VLOOKUP. We look at each function on its own to understand how they work, then we’ll use them in combination. 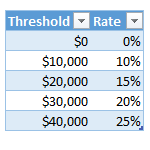 Use List functions to do VLOOKUPS in Power Query as an alternative to merging tables. Sample data and file available to download Excel Wildcards in your SUMIF, COUNTIF and VLOOKUP

Excel VLOOKUP with Dynamic Column Reference allows you to copy the formula across columns and have the column reference automatically update.

VLOOKUP to the left with this clever use of CHOOSE to trick Excel into looking up a column to the left.