I had some feedback that as the sequence grew longer, the .Find method became increasingly slower, to the point that your hair grew quicker.

I am surprised to hear this as I’d expect a routine provided by Microsoft to be as least as fast as anything us mortals could write.

I chose to use .Find really for its ease of use, I wouldn’t have to write any loops to check each number. But when the length of time it takes to list missing numbers becomes frustratingly long, it’s time to look for another way.

One of our readers provided some code (thanks Bryan) where he compared two ways of listing missing numbers in a sequence, the first using .Find and the second using loops to check a collection created from the number sequence.

What the code revealed was that by the time you got to 10,0000 numbers in the sequence, the difference between the two approaches was already noticeable .Find was taking 50+ seconds, whereas looping through a collection took less than 2 seconds.

I then received a message from another blog reader, Dennis, saying he was trying to find missing numbers in a 90,000+ long sequence of numbers, with .Find taking over half an hour

So, I thought I’d better check this out myself and thanks to the code Bryan provided I came up with this.

What The Code Does

The purpose of this testing was to compare the .Find method against an approach looping through a collection created from the range of cells containing the number sequence.

Whether or not this approach is totally scientific isn’t really important, what is important is that the two approaches are compared in the same way. Apples with apples.

The most important thing is what you, or the user, experiences.

If one approach is lightning fast and the other is slower than a snail going uphill, then we don’t really need to make sure our testing is accurate down to the microsecond.

That said, the testing routines use a function called MicroTimer, provided by Microsoft for accurate timing.

It uses Windows API calls to the computer's high-resolution timer and is faster and more accurate than the VBA Time function. It can measure intervals down to microseconds.

The results of these tests will be different each time you run them. Things like the number of missing numbers, whether you are using Debug.Print or not, and other processes running on your computer will mean each test will be slightly quicker or slower than the last one.

Actually that’s a bit of a lie. By the time I got to 100,000 numbers in the sequence the .Find method was taking so long I just ran it twice. But I did test the others four times each.

Because RANDBETWEEN is volatile, if we wrote the missing numbers to the worksheet, RANDBETWEEN would recalculate each time we did this, changing the numbers in our sequence and this would mess up our test.

With only 10, 100 or 1000 numbers in the sequence, the difference between .Find and the collection/loops routine isn’t perceptible, all the results coming back in under a second.

But with 10,000 numbers in the sequence, .Find takes about 51 seconds, the collection/loop code finds all the missing numbers in less than 2 seconds!

With 100,000 the difference is even more staggering with .Find taking more than an hour and 20 minutes to find all the missing numbers in the sequence. The collection/loop code did it in under 9 seconds.

I don’t know what is going on in the .Find method but beyond 1000 numbers in a sequence, it seems to be incredibly slow at this particular job. .Find is very good if you want to do a one-off location of a single thing within a range, but for this particular application, looping is by far the better approach.

Below is a table of results (measured in seconds) for each of the tests starting with 10 numbers in a sequence and working through to 100 000 numbers.

After the testing I had to modify the code so that it gave us results we could use in the workbook, not just printing to the Immediate Window. All the code can be found in this workbook.

When you open the VB Editor (ALT+F11) you’ll see 2 modules named Testing_Code (guess what’s in there!), and FindMissingNumbers. 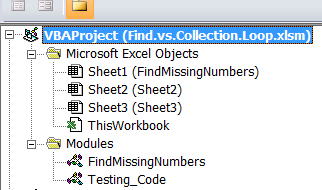 Testing_Code contains the MicroTimer function, and two subs called Using_Collection_Loops and Using_Find. You can run either of these subs to do your own testing.

Specifying which value in the array lngNumValues to use in testing determines how many numbers are tested. For example lngMax = lngNumValues(4) sets lngMax to 10 000, so the code will use a random sequence of 10 000 numbers.

When you run either of the testing subs, you’ll see the missing numbers displayed in the Immediate window, followed by a duration for the code execution. 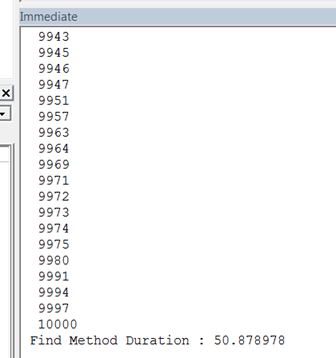 How To Use the FindMissingNumbers Sub In Your Workbook

On the first sheet of the workbook I’ve added a big green button, click this and the macro will run. You can also run the macro in a number of other ways. Read this article to learn how to run a macro using a shape, shortcut keys, an icon on your Ribbon, or the Quick Access Toolbar.

When the macro starts the first thing you need to do is specify the input range. You can either use your mouse to select the range, or type it in

Then you specify where you want the missing numbers to be listed. You can select a single cell and the results will be output into that column.

If you select more than one cell across a row, the results will be output across that row.

By submitting your email address you agree that we can email you our Excel newsletter.
Please enter a valid email address.
Download the workbook with all the code. Or copy it from below.

Disclaimer – Please test the code yourself, it may not work in your environment. All code provided as is without any warranty