This tutorial is applicable to Excel 2019 onward.

New in Excel 2019 is the SWITCH function. It looks up a value in a list of values, and returns the result corresponding to the first matching value.

It’s a great alternative to nested IFs, or even the new IFS function.

I liken it to a VLOOKUP, except the ‘table_array’ argument you might be familIar with from VLOOKUP is contained all in one cell.

By submitting your email address you agree that we can email you our Excel newsletter.
Please enter a valid email address.
Download the Excel Workbook. Note: this is a .xlsx file please ensure your browser doesn't change the file extension on download.

The first argument in SWITCH is “expression”, which will be new to many Excel users, but not to those familiar with SWITCH from other programming languages.

Instead of calling this argument ‘expression’, it could just as easily be ‘value_to_switch’ so don’t feel intimidated by this fancy name.

The value to switch (a.k.a. expression) in this function can be a cell reference, value or formula. Pretty much anything that evaluates to a single value. For example:


After the expression argument we have pairs of value and result arguments: 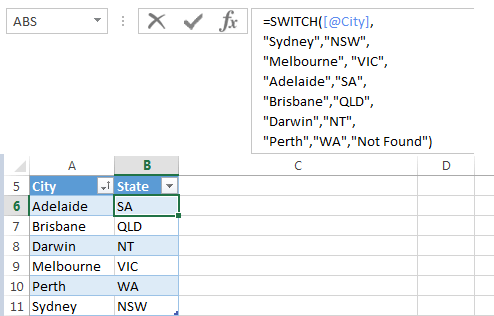 We can use SWITCH to return the State details, in column B, for the Cities in column A of this table:

I’ve wrapped each value and result argument onto separate rows in the formula bar in the image above. Here is the formula again without wrapping:

If we compare the SWITCH formula to the equivalent nested IF function:

Or even the new IFS function:

You can see the benefit of SWITCH is that we simply reference the City column once, i.e. we’re not repeating the logical test.

Plus, in comparing it to the alternative of using VLOOKUP, with SWITCH we have the equivalent of VLOOKUP’s table_array in each formula, thus making it somewhat easier to read, but beware the limitations.

Use SWITCH to Return the Fiscal Quarter

In Australia our financial year starts on 1st July and this means we often have to classify dates into fiscal quarters, July being quarter 1 and so on.

One way to do this is with SWITCH:

In the example above I’ve used the MONTH formula in the expression argument. The MONTH function returns the month number, with January being month 1, and so on. I’ve also added a space between each value and result argument to make it easier to read.

The SWITCH Function is limited to 126 pairs of value and result arguments. However, if your formula uses more than 7 pairs I’d consider an alternative, because this formula will get difficult to maintain and may result in performance issues.

There are more efficient ways to get the same results, as discussed in this tutorial ‘When to say no to Excel Nested IFs’. Even though this article deals with Nested IF’s the desired result is the same, i.e. to lookup a value in a list or table and return a corresponding value.

SWITCH in Earlier Versions of Excel

If a user opens an Excel file containing the SWITCH function in an earlier version of Excel it will still display the result, but the function will be prefixed with _xlfn. Like so:

They can happily work in the file and save it without breaking the formula.

However, should the user edit the cell in a version of Excel that doesn’t have the SWITCH function the result will be converted to the #NAME? error. Opening it in Excel 2019 again will fix the errors.